You know the rest of the saying!

I never ever in my life imagined I would be so “into” photographing birds.

Not all birders are bad.

1: a catcher or hunter of birds especially for market
2: a person who birds

I have met birders.

And I do not fit into the category of a birder.   For one I am considerate of others when driving (well, hubby is).  He goes slow, as not to raise dust, he pulls over to the shoulder as far as he can without freaking me out by thinking we’re headed into the marsh,  and we will close the dang truck door if we get out so if someone does drive by, they can get past.

Okay,  now that I have gotten that out of my system, shall we continue?

I have learned things this year while roaming the Refuge.  #1, you are never ever to old to learn! It keeps the mind growing!  I had absolutely no idea that Egrets and Herons nested in trees. Why did I think they were ground nesters? Because you always see them next to the bank of water right?  Ya, not so much!  The only thing I knew was Herons are bluish-gray and Egrets are white.  I know that both are skittish as all get out, when you try to photograph them on the bank, poof, they’re in the air.  Did you know that their wingspan can be up to 5.6 feet?  Pretty cool.  Egrets also fly at 25mph.

Egrets nest in colonies.  The male is the nest builder, he tries to attract the female, so he builds her a nest for their young. (Pretty presumptuous I think)  Hey, wanna come to my nest?  Thats an opening line if I’ve ever heard one!  Mr. Egret likes to get to the colony first so he can get the best spot.  However, they also nest with other birds. Herons and Cormorants and more.  At this location Mr. Heron was at the top of the tree, so I think Mr. Egret wasn’t the first this year. 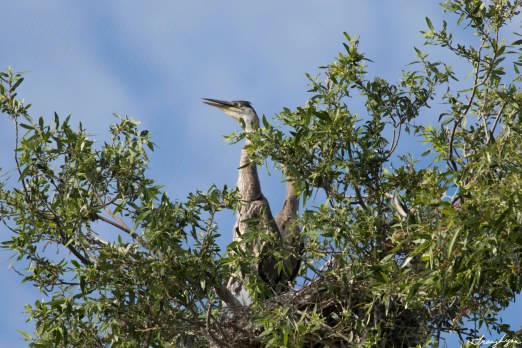 Egrets are monogamous during the season.  It is not known if they are for life or not.

So, here is the reason of why I know these things.  Google haha…  well, hubby and I were out taking pictures, (okay I was) and we saw a Heron in the top of the tree.  So I had to partake in the moment!  When I got home I noticed a little tiny Heron head peeking out of the nest.  I was hooked.  So, that said, it became our weekend ritual!  Since we head that way every Saturday anyway, we made it a point to go through the Refuge and see what we could find to shoot. 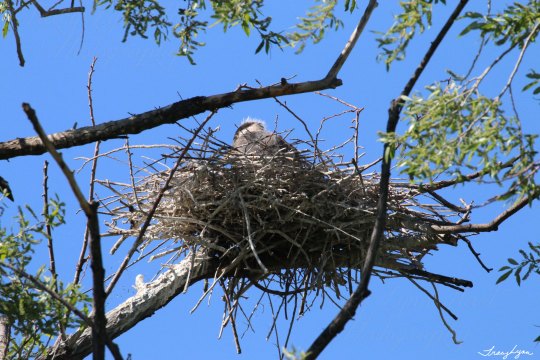 Yep, I was totally hooked.

Back to more fun facts.  During breeding season, long feathery plumes grow from it’s back.  They are called aigrettes, which they hold up during courtship displays.  The sad thing is, they were almost pushed to extinction because people in the “olden” days, wanted the plumes.  Boo Hiss for those people. Now I know where those feathers came from on those silly looking hats!

Both parents feed their young.  The babies climb out of the nest around 3 weeks old and begin to fly at 6-7 weeks. And when this happens, I will become sad, because shortly there after I will have an empty nest until next year.  I am already sad thinking about it.

My advice for you all is this; find a road along a marsh or a wetland.  Something with some tall trees perhaps.  And visit it often.  You never know what might show up.  I really enjoyed learning about these beauties this year!  And I totally loved capturing them in their natural state! 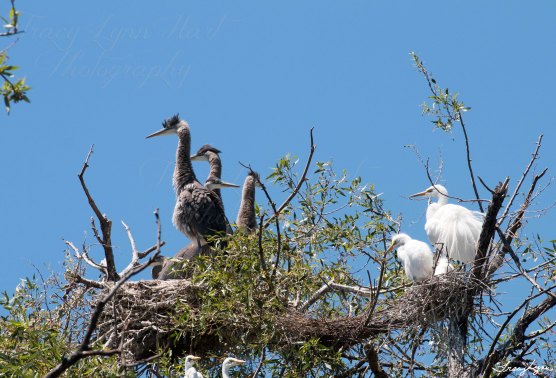 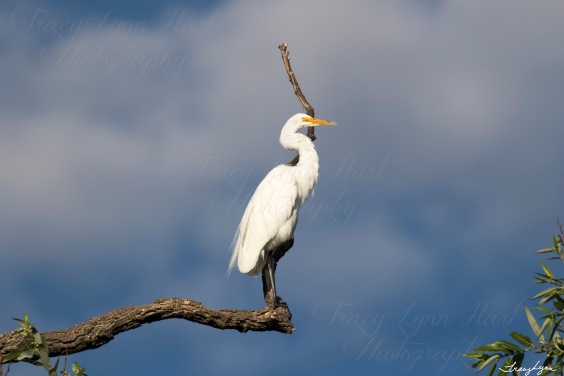 Enjoy the rest of your summer!  It’s gotten to the hot part of the year on our mountain in the Southern Pacific Northwest, and I am not a fan.  However, I have many fans going in my house!